What do you know of silent disco? 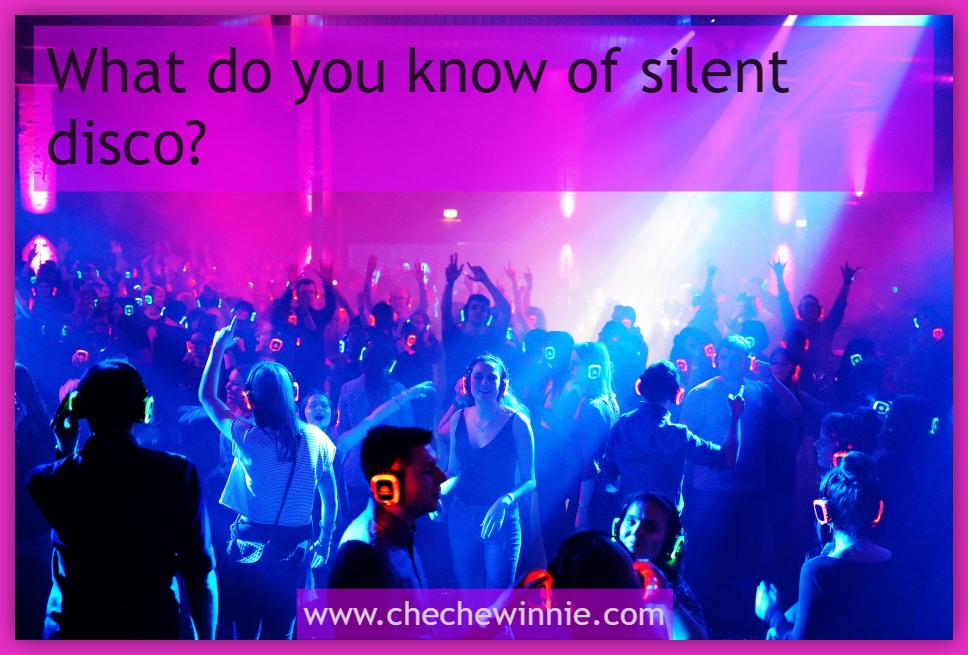 What do you know of silent disco?

What do you know of silent disco? Is it a cool way of having fun without disturbing others? Should we embrace it to curb noise pollution?

It is an event where people dance to music listened to on wireless headphones. Rather than using a speaker system, music is broadcast via a radio transmitter with the signal being picked up by wireless headphone receivers worn by the participants

How cool is that? Entering a room with zero noise filled with happy dancing people. I would love to just sit at the corner and watch them.

It is the propagation of noise with a harmful impact on the activity of human or animal life.

Unlike other forms of pollution, many seem to ignore its impact on people, animals or any other living organisms. It has been ignored yet dangerous to these lives.

This is problematic in urban areas where vehicles are in huge numbers.

The presence of many roads and the possibility of traffic jams. That tends to make some drivers really impatient, ending up hooting our ears off.

Not forgetting the sirening of ambulances trying to get through the crazy traffic jam.

Airports are the worst when it comes to noise pollution. As the cities’ population continue to grow, people are occupying areas surrounding these airports. And the noise they are being exposed to. Is bad for their health.

In Kenya, especially our capital city, Nairobi, we have moving clubs. Which happen to be our public means of transport. Our buses have been armed with sound systems similar to the ones found in the clubs. And the volume is always on the high end.

The police and environmental authorities have tried to curb these issue, but still, have a long way to go. Some public vehicles have removed the fancy sound systems. But people end up choosing the noisy ones.

Can you imagine being in a very noisy vehicle after a long day in the office? Then caught up with a traffic jam that delays you for an hour or two. You end up with a massive headache. I wonder how drivers of these buses manage to work in these conditions.

It may be an outdoor party in the neighborhood. As the party gets to the climax, they forget about the neighbors and the effects of their noise.

Not forgetting politicians in their rallies, religious functions, protests, celebrations, among others. Any functions that use the public address system.

There’s this place I visited that have many churches close to each other. And all of them used the public address system that helped get the message out there. Problem was, they were too close to each other and it sounded like noise. I wondered if those inside the churches experienced what we were experiencing outside.

One minute you would hear a worship song from one of them, then a very loud praise song from the other, and shortly a very determined preaching session from the other one. Sounded like a battle.

Maybe if each of these churches maintained whatever was happening within. It could be a happy thing for everyone. Not that am against spreading of the word out there, but it should be done in an orderly manner.

Other sources of noise pollution include:

With the headphones, one can be able to control levels of the noise. Ensuring you don’t expose your self to noise pollution.

When you visit a forest, you will notice the calmness, silence, sometimes chirping and songs from wildlife. That is what heals the soul. Allowing you an opportunity to listen to your inner self.

Noise pollution is not good for your health. Do your best to minimize your exposure to it. We have authorities ensuring everyone adheres to the noise rules. If anyone is exposing you to noise pollution despite warning them. Forward them to these institutions and save everyone from the harm.

4 thoughts on “What do you know of silent disco?”