What is this Carbon Footprint? 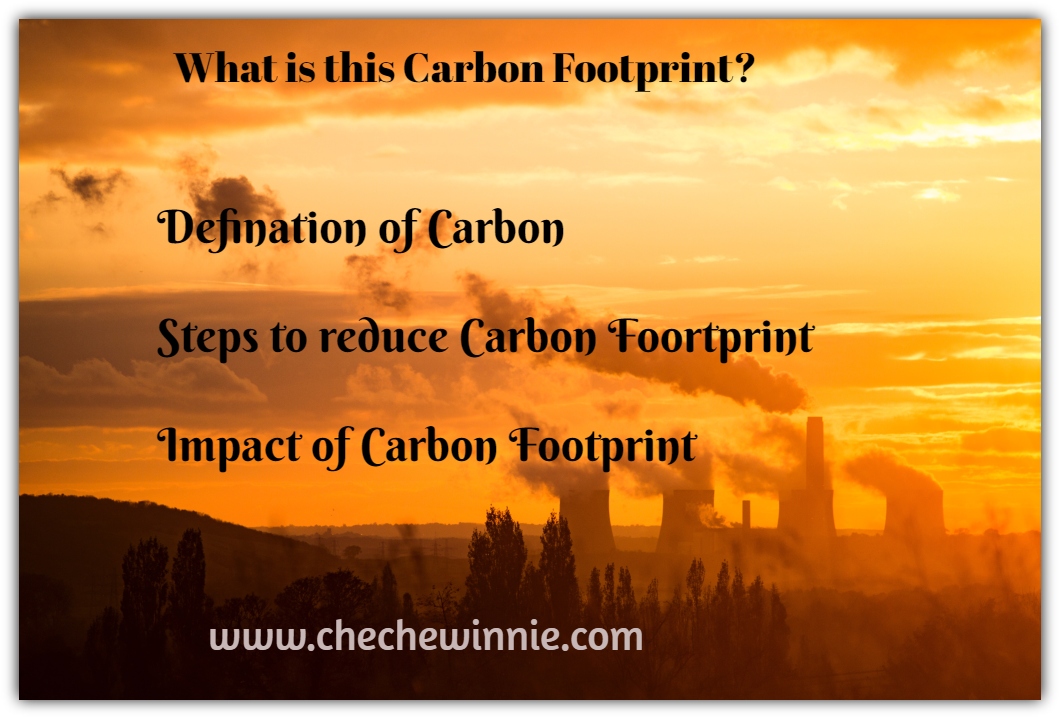 What is this carbon footprint?

Have you heard of it or saw it in some titles ? People throwing the word as they talk about climate change. Urging us to reduce our carbon footprint. Then you wonder what is this thing that am to reduce?

Carbon footprint is the amount of carbon dioxide released into the atmosphere as a result of activities of an individual, organization or community.

So what are these activities that contribute to carbon footprint?

Almost everything we do contribute some carbon dioxide into the atmosphere. These activities includes: driving, flying, using your laptops, production and use of plastic bags, consumption of inorganic produce, using public means, and many others.

As you can see, a wide variety of our activities does contribute to carbon footprint. Some can be avoided while others, we have to include in our livelihood for survival.

We have several carbon foot print calculators all over the internet. Use them to determine how much carbon dioxide you release to the atmosphere as a person.

You can also be able to determine how much of it is released by your community or your place of work. This will help you evaluate your starting point and an idea of what you are dealing with.

Target helps you get a clear view on what you need to do. Offering a smooth pave to attaining your goal.

It’s now time to allow yourself time to eliminate the avoidable carbon dioxide that you release into the atmosphere. You will do so by avoiding the activities that contribute to your carbon dioxide.

The most common way to reduce the carbon footprint of humans is to Reduce, Reuse, Recycle, and Refuse.

So instead of always driving in the heavy traffic, you can start embracing walking or cycling. Practice car pooling. Start eating local and organic foods. Just to name a few.

As we saw early, some of our carbon dioxide release are unavoidable. Offsetting is a way to deal with such carbon dioxide emissions.
They are set rules and regulations meant to control how much carbon dioxide we release, so you just have to go by them and ensure your organization obey them to the latter.

Do you still remember how we agreed that speaking is very important?
Same applies here. Talk about it with your family, friends , colleagues, on your websites or anywhere you have an opportunity to do so.

By spreading the word, more people will learn about it. Hence embrace and act. With that, we will be able to join together in reducing our carbon dioxide release.

Different governments and international bodies have come up with laws that will help control our activities. With the aim to ensure we minimize amounts of carbon dioxide produced by our various activities.

By simply working with these laws, our carbon footprint will be much smaller.

Impacts of carbon footprints on our planet

This include greenhouse effect and global warming due to the rise of carbon dioxide in the atmosphere.

When some of us decide to ignore reducing their carbon footprint. This means that they will end up using more resources for their activities. By consuming more resources, it will deplete and become scarce for others and eventually for them too..

13 thoughts on “What is this Carbon Footprint?”