Can wildlife adapt to climate change? 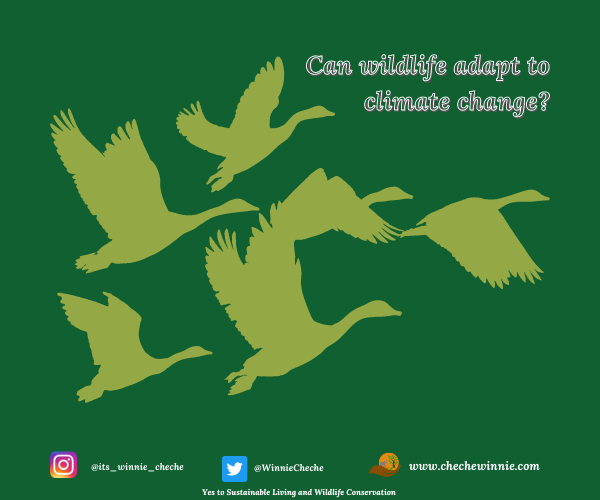 Can wildlife adapt to climate change? Have you ever thought of this question? Climate change has become part of our lives, and we continue to explore adaptations and mitigation measures as humans. How is wildlife adapting to these changes?

Survival for the fittest

As per Wikipedia “Survival of the fittest” is a phrase that originated from Darwinian evolutionary theory as a way of describing the mechanism of natural selection. The biological concept of fitness is defined as reproductive success. In Darwinian terms, the phrase is best understood as “Survival of the form that will leave the most copies of itself in successive generations.”

Over time, we have been adapting to changes introduced to our environment, to survive. This applies to all living organisms, as we are all driven by the need to survive.

Herbivores have managed to use their wide lens views to keep an eye on the enemy while feeding, or taking turns to keep guard while the others feed. Predators on the other hand continue to excel in camouflaging with the environment. Becoming their prey.

They have not forgotten the most important homework, reproduction.

Whether solitary or social, wildlife continues to reproduce. Some take care of their young ones for some time while for the others, it’s survival on your own from the very beginning. Depending on these situations, determines the numbers of young ones reproduced by wildlife. Where surviving is extremely difficult, wildlife will tend to over reproduce to cater for the number that will not make it through the challenges.

Are they adapting to climate change?

Sadly, wildlife has three options when it comes to adapting to climate change. Namely;

Wherever they’re not able to outsmart these changes, they end up dying. Thus explaining the notice of rapid species extinction.

The droughts, floods, heatwaves, wildfires, among other natural disasters caused by climate change, continue to kill wildlife in huge numbers. Being the wild alone, and with limited not-so-well-organized rescue plans. Wildlife ends up suffering extensively before they can get any meaningful help.

Some wildlife is lucky to manage in migrating from the most affected areas, to better ones.

The places to run to are also becoming limited, as climate change continues to spread rapidly. making all places almost the same, when it comes, to the harsh conditions.

As you can tell, wildlife goes through climate change just like humans. They are just limited to what extend they can help themselves.

Unfortunately, there’s one thing that remains common. Wildlife has limited options, and if missed end up dying.

Let’s fight climate change as make it livable for all of us. We are all important in these ecosystems.

2 thoughts on “Can wildlife adapt to climate change?”