Conservation is a Serious Affair 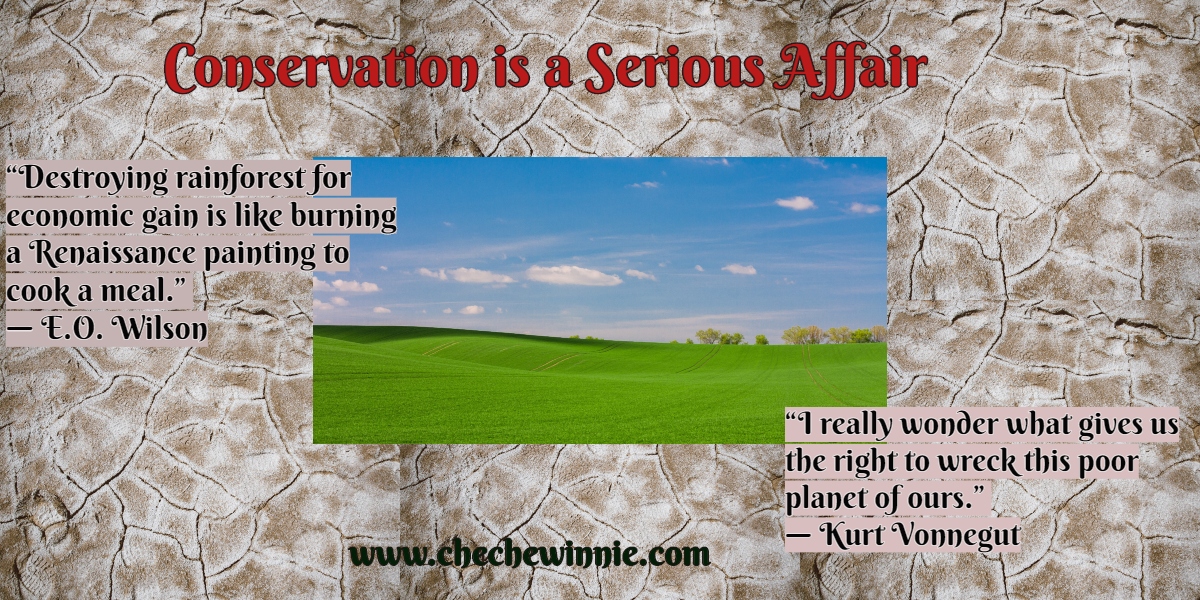 Conservation is a Serious Affair.

Conservation is a Serious Affair. This includes conservation education and awareness. Let’s stop taking them for granted or as jokes.

Some people think that conserving our environment is a responsibility for a particular group of people. They don’t see any importance of their participation.

These are people who will litter the streets comfortably knowing that some worker some where is being paid to collect such trash.

They will will leave a lost or injured animals helpless on the road , because to them, that’s not their business.

Such people will not even bother to have flowers or pets. They see such as waste of time and disturbance. And in the long run, they miss what nature can offer them if they were to change their thinking.

I tend to think that all public resources belong to the public. Hence by default, it’s our duty to ensure they are in good condition. That effective laws are passed to protect them and their management by the set organisations is carried out well.

We are supposed to know and ensure that the natural resources are not abused or mishandled by anyone.

As much as we may have different bodies tasked to ensure our environment and species are okay. We have to be actively involved.

What’s the point? What does it concern me?

Some may wonder what does it concern me if species x or y vanishes? Does it really affect me as a person? Is it really necessary for me to participate in this whole thing? What is it in for me if I do anyways?

It’s like they have far more important things to do with their time, resources and everything. They don’t see how damage or loss of some species affect them directly.

They simply accept what is happening to the planet and move on. See such things as circumstance that are beyond our control.

Hence accepting them as they come and never bother to prevent or even think about doing anything to help the situation.

As you conserve the environment and it’s resources, you may end up spending your quality time, money, energy and many more. You may not see anything in return in terms of monetary value.

But instead receive value that can’t be priced. And that’s where most people lost focus. We don’t conserve our planet to gain money or make profits. But we do so to have reclaim our healthy planet back and save the current species from extinction.

At first when conservation topic was making it’s way into our world. It came as a threat of a black future if we don’t change our ways. We were made to understand of the clogged oceans, cleared forests, species extinction, among others.

The news were all about what we have lost and what’s staring at us. The depleting ozone layer, the melting north poles, warming of the oceans, etc.

It was like a horror movie. But with time, they started to show us that it’s possible to reclaim our beautiful planet back. It was important to have the scarely part first. So as to get our attention and know that things are not as usual.

So yes, species extinction, climate change, global warming, greenhouse effect, melting of the north poles, depletion of the ozone layer and many others, is very true. And we are the greatest contributors of these problems.

Then we have some of us who have already given up. They don’t see any hope or way to reverse the damage. They just want us to let be. To enjoy what we have while it last.

After all, several research have been done to predict how long we have with several species. They show how many years it will take for these species to be wiped out from our planet.

What they don’t know and appreciate , is the work done by such researchs. The researchs helps us understand what we are doing wrong, how we can reverse the damage, who needs more attention and where the survival chances stand. They are to be used for guidance. And not discouragement.

With these researchs we are able to concentrate more on the most affected as well as put an eye on the safe species.

Conservation is not only for those who studied or work in related fields. It’s for everyone who cares and wants to contribute to saving our planet.

Needed information is easily accessible almost everywhere. From internet, magazines, TV shows, documentaries, physically, just to name a few. You simply have to have passion and zeal to be the change we need.

Learn more about it, understand it, participate and reach to many others. Turn others to do the same and together we can manage to save our species and planet at large.

So yes, conservation is for everyone who cares enough of the species and nature. Anyone who wants to live in a healthy planet. Anyone who hate seeing species extinct. Anyone who knows value of nature.

Conservation is a very serious affair than need our undivided attention. No more joking about it or taking it for granted. When you are tempted to make a comment joke about it on an article, think about it.

Try to give it some thought and ask yourself, what if this thing is true and real? Because it’s true and real. You may not feel it at personal level as you expect but it’s happening.

And if we continue joking about it or being sarcastic, it will reach the no return point. A place where we will not be able to do anything about it. A planet that will have nothing to offer us. We don’t wanna get there.

Take time to learn more about conservation, see what you can do about it and act.

If you can learn and teach others, well and good. If you can help physically or through donations, that’s good. If you can be able to ensure laws are put in place and respect hence positively affecting conservation, good. Such is what our planet needs from us. It’s starts with you, time to reclaim our healthy planet back.

We will do so by acknowledging and agreeing that conservation is indeed a serious affair.

6 thoughts on “Conservation is a Serious Affair”