Wildlife conservation conversation among youth: Why it matters 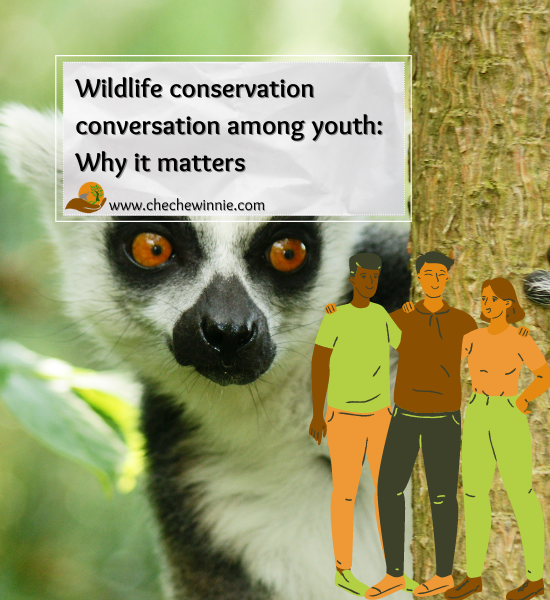 Conservation of wildlife is an important goal because wild animals are an essential part of the ecosystem. Over time, human activities have harmed the environment and the animals that live there, which has led to dwindling populations and even extinction in some cases.

It’s estimated that as much as half of the world’s population of vertebrate animals has disappeared since 1970, according to World Wildlife Fund statistics. Wildlife conservation conversations among youth can help encourage others to take action and make positive changes to help protect and save animal species from extinction in the long term.

The current state of wildlife

The world is changing, and the wildlife that inhabits our planet is constantly struggling to keep up. Populations of animals such as snow leopards, tigers, and orangutans have dropped by more than 50% in just the past few decades. These species have fallen victim to habitat destruction, poaching for profit, human-wildlife conflict, and climate change.

Wildlife trafficking has also become a major issue for some endangered species, like rhinos. In 2017 alone, there were over 1,500 rhinos killed in South Africa alone; this has caused populations of this animal to plummet from 500,000 at the start of the 20th century down to less than 30,000 today.

The importance of wildlife conservation

If we keep destroying our environment and continue to kill off animals, the consequences could be disastrous. We might not notice the effects for a while, but as time goes on, there will be a lot more problems that need solving. For example, if the ice caps melt because of global warming, people living near coastlines will have their homes flooded with water.

If we don’t stop polluting the oceans then animals might die out and fish populations may decrease. Without healthy fish populations, humans won’t be able to survive because they are the source of so many nutrients. The species extinction rates are skyrocketing too, meaning we’re killing off animals faster than ever before. With all these environmental issues combined, things might get pretty bad in the future.

What can be done to help?

To help conserve wildlife, one must understand the obstacles and challenges that face their efforts. That is why it is important to have conversations with people of a similar age group and see how they are feeling about the topic. If they are interested in learning more, provide information on what they need to do to make an impact.

If they are not interested, find out why and see if there is something that needs to be changed or added to make them more willing to get involved. One thing that may turn these children away from wanting to learn more is not being able to take immediate action. Make sure you give kids the opportunity to do things like donate money, volunteer time, and make a difference right now!

The role of youth in wildlife conversation

Young people are often the ones who can best relate to their peers about the importance of wildlife conservation. Research has found that there is a strong correlation between young people’s attitudes toward animals and their attitudes toward people so when they care about animals, they care about human beings as well. This is an important message for everyone to hear. It may not be always easy or comfortable for adults to communicate with children about topics like this. But we owe it to them.

It starts with listening, then asking questions and encouraging curiosity, which leads to action. When you start to ask kids what they want out of life, you find out how much power these little people have. They need to know that they have a voice and that their words matter. We all have a responsibility to shape the future–what kind of world will our kids inherit?