Are Humans evolving to Monsters ? 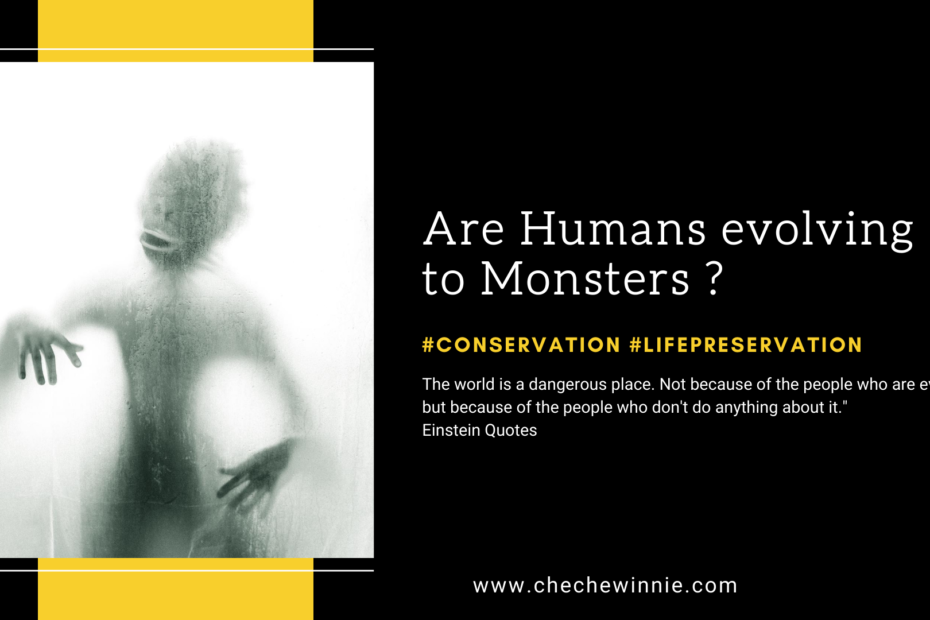 What is happening on our planet, are humans evolving to monsters? Have you seen how we are harming our fellow humans? From butchering one another, corruption, tribalism, discrimination, racism, you name it. It is like every country is busying trademarking their unique torture to humans. Do we even have souls anymore? What happened to preserve lives?

How is this affecting our Environment and Wildlife?

I love wildlife and nature, hence heartbroken when I see my kind treating them ruthlessly like outsiders.

Am here wondering, if human no longer sees the need and obligation to respect their fellow humans. What will make them respect wildlife or the environment?

We have witnessed people losing their life, or subjected to the worst torture by other humans. Human rights have slowly been left on papers, and rarely practiced anymore. As much as the international bodies may come through, by then lots of lives continue to be lost. Detentions are increasing for any foreigners in several countries, without even being a threat.

This is happening in both developing and developed countries. So civilization states don’t make any difference. They kinda make you think maybe things were better, and we were more human before civilization was introduced.

This has made the people considered to have influence, power, and money, do what they want with the rest of us. From misusing the available resources, and using us as their stepping stones. With a feeling that nothing can be done to them, or they have the last say.

The greed is way out of order

Politicians no longer understand what respect is, nor care about what picture they paste out there. The more they abuse each other and use harsh words on each other. Gives them the feeling that they have an impact. It’s no longer what they have done for their people, but how they have abused their opponents. Where are we heading?

No one is selling agendas anymore, they are busy tearing each other apart. Only to unite when they want to steal more from the public or serve their selfish needs.

When did we become Monsters?

Sadly, we normalized various vices towards humans and other living organisms. Hence no longer notices it. Everyone wants a piece, and it doesn’t matter how they get it. Life is no longer valued or respected. Just like we are used to disposing of waste, we are doing the same to lives.

Greed and selfish revealed the monsters within, and they are now out there living boldly. Raining hell on anyone and anything that may hinder our ambitions.

Poor people have been used and dumped when considered to be no longer useful. Sadly, picked again when the need arises and the bad treatment offered all over again.

As we continue to promote mental health, can we address what contributes to it? Can we be ad go back to the drawing board? In short, can we be humans once again?