I Love the Awakening Love for Wildlife by Kenyans. It’s refreshing, promising, and encouraging. Finally, we as conservationists can appreciate the strong support from the public. Its no longer conservationists’ role to fight for wildlife and the environment.

The “Confusing” photo of construction inside Nairobi National park 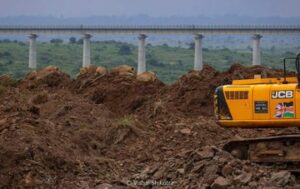 The “Confusing” photo of construction inside Nairobi National park

So we work up a photo that suggested construction in Nairobi National Park with Lions present. Kenyans on Twitter went ahead to air their concerns and for the better on 23rd June 2020 morning, Nairobi National park trended. Everyone defended the park, and those who were lost kept asking questions.

The trend was effective and got the attention of our Kenya Wildlife Service. Who had no option but to give a press release? They explained that it was a construction meant to repair some roads inside the park. And rehabilitation was on the table.

But it was clear that Kenyans are alert to every move made inside the park. They have been left out before, but not again. They are ready and more willing to be involved in all decisions made for this park.

Especially now that they are plans for developments within this park, people will be spooked by anything remotely close to some construction. So yes, you may consider it consider a confusing photo. But we see it as a red alert that needs undivided attention.

Finally, We had Public Participation regarding the new management plan for Nairobi National Park

This happened a week ago, we were able to air our concerns, suggestions, and discussions around it. And they are to be shared with the concerned parties.

From the meetings, we were able to witness love and concern for the park by the participants. You could feel it from their words, discussions, and questions. Our wildlife future has some light at the end of the tunnel.

I hope that we will be heard, and our park can be offered a second chance to survive the bursting city.

Small wins add up to big wins eventually. Today we celebrate the concern, despite the reason being considered “confusing’. One thing is for sure, it didn’t confuse our love for Nairobi National Park.

Fall in love with our wildlife and nature and let us make the planet better again.