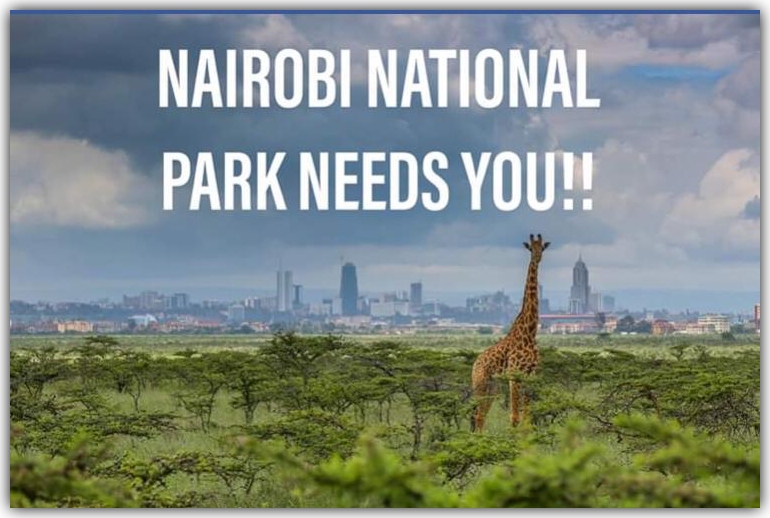 Nairobi National Park Needs You just like the Corona Virus needs you to stay home so as to stop the spread. If we don’t do anything about the proposed developments within the park, then it will be history just like the amazing dinosaurs. They will be no longer an iconic park in the middle of a city in Kenya. SGR and south bypass have already taken some land, wildlife suffering is evident. But still, despite all that, we have some people proposing more developments within the park.

Why do you visit the National Park?

We visit these areas to enjoy wildlife in the wilderness and get to enjoy their wild side. That said, we don’t need hotels or fancy facilities there. In fact, those who really want to spend more time in the park should only be allowed less invasive camping.  Campsites that have minimal to zero alteration of the environment. Hotels or any entertainment facilities should be banned from all conservation areas. We already took enough land from wildlife. If you need to be comfortable in a hotel, then visit the big cities around the world. They have facilities built for that.

So this is what’s happening in case you are wondering

Nairobi National Park is a specially unique park in that it is the only natural park existing within a capital city with four of the big five animals. It is the oldest park in East and Central Africa (gazetted in 1946) and the only highly endangered black rhino sanctuary. It lies within the greater Athi Kapiti ecosystem/migration corridor (which used to host the more famous wildlife migration of zebras, wildebeest, and giraffes in the early 80s compared to the current Mara migration). With its size of 117KM sq. it depends(ed) heavily on this ecosystem which has, over the years, been fragmented by development activities, increase in population, and changes in land use resulting in the loss of the migration corridor between Nairobi National Park, the greater Athi Kaputiei third triangle into Amboseli. In addition to inserting more pressure on the park, the fragmentation, development, and changes in land use further led to a reduction in wildlife species. Nairobi National Park which used to host hundreds of Cheetah population currently has only one cheetah. We no longer see wild dogs in the park. Aardwolf is now a rare sight.

More recently the park experienced major infrastructural encroachments through the Southern Bypass, SGR Phase two, oil pipeline, and the inland Container Depot road all routed through the park. Due to these, we saw a heavy upsurge/resurgence of allelopathic invasive species specifically the highly noxious parthenium species invading the park. Another effect is the negative precedence already set where protected areas and other areas of ecological importance are now seen as idle land for developments and slowly losing the perspective of ecosystem services and values In 2018 however, the Ministry of Tourism and Wildlife through the current Cabinet Secretary recorded a milestone success when they developed and launched Kenya’s National Wildlife Strategy 2030.

The main objective and aim of this strategy was and still is to Maintain and Improve Habitat and Ecosystem Integrity to reduce biodiversity loss, protect ecosystem function, enhance connectivity, and increase resilience. Building a mega infrastructural facility such as the hotels, restaurants, and houses in the already suffocated park not only goes against the main objective of the National Strategy by further promoting heavy habitat loss and ecosystem degradation but will also affect the government’s own efforts towards rhino conservation by destroying the forest areas which is the rhino breeding sites.

The destructive activities we currently experience in parks and protected areas begs the question of whether really government agencies mandated to protect and advise the executive arm of the government on conservation and protection of these areas are following due diligence in delivering their mandate. The leadership of KWS has lost its original authority over the past years and power for standing for what is right. The KWS good servants are so intimidated to even provide sufficient information or support towards genuine conservation efforts by other stakeholders. Centralization of operations at the headquarters has also undermined the authority and independence of senior officers managing these parks worsening the situation. The whole structure and system need a proper overhaul, complete independence, and decentralization of authority.

Parks and protected areas have been over-exploited due to so many intrinsic and extrinsic factors such as inter alia increase in changes in land use, climate change, and weak public sensitization on matters conservation. The main reason, however, is the weak institutional arrangement and legal frameworks. We have weak and conflicting policies on wildlife conservation and other sectors. From a National perspective, there is no deliberate move towards wildlife and environmental conservation in Kenya’s development blueprint The Vision 2030 which is infrastructural development heavy. Some of the key development initiatives conflict the conservation efforts and conservation stakeholders are not effectively involved at that stage of decision making. Lack of a proper cross-sectoral and inter-government agency synergy towards conservation has promoted overexploitation of these spaces. Land use policy and physical planning act are strong legal guidelines that have failed to cushion these areas from encroachments and control the types of activities conducted within and at the boundary of parks and protected.

How Can you help / Take Part?

Can the wildlife in Nairobi National Park count on you?

Now that you are informed of what is going on, can we count on you?