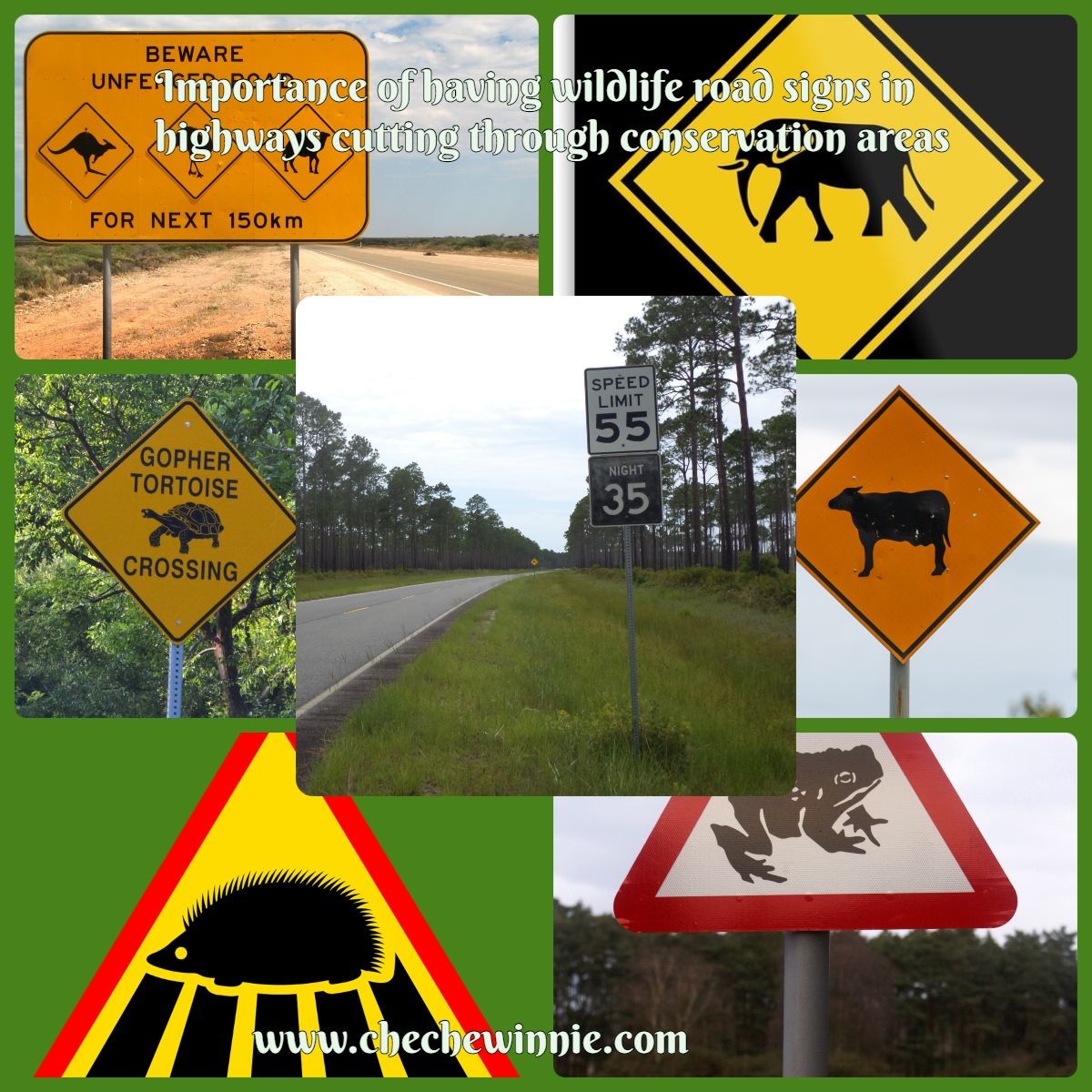 Importance of having wildlife road signs in highways cutting through conservation areas. Since developments have led us to make way even in the most inappropriate places. Trying to connect various destinations.

They are road signs used to alert the drivers on the possibility of wildlife in the vicinity. Hence requiring them to reduce on their brakes, give way to wildlife and most importantly, avoid running them over.

It covers all form of wildlife, from the very small ones to the huge ones. Each of them deserves right to safely cross the road.

After all, it’s our highways that are crossing through their natural homes. So we are the ones to be careful and alert.

The number of wildlife killed by speeding vehicles is rising each day. Sadly, no one seem to act on it. Wildlife are losing their lives to hit and run monsters. Yet they have right of way.

Most highways connecting various destinations cut through conservation areas. Which is the natural habitat for these wildlife. We have built roads in their homes and sadly brought death to their doorstep. We should be able to take care of the impacts of having these highways and protect wildlife.

Being tarmacked roads, speeding is almost impossible to control. The drivers are carried away by the tarmacked road convenience hence enjoy high speeds. And when the accidentally encounter an innocent wildlife crossing, it get very difficult to avoid hitting them.

Very few if any, bother to attend to a wildlife that has been hit. Mostly, the drivers ignore the wildlife, leaving them to die. As they go on with their journeries as if nothing really happened. The hurt wildlife may have had chances to survive the accident but not allowed that chance.

We seem not to use our brains. With or without wildlife road signs, we should be very careful while driving anyway. We should respect each living organism and allow them time to cross the roads. We as able to observe our surroundings so technically, we should be able to tell that we are passing through an area with wildlife. Hence should to have some crossing the road or nearby. With that in mind, we will be able to respect their lives and ensure no incidents.

My plea to the Kenya Wildlife Service

You guys are responsible for the protection of our wildlife, and you do a good job despite the million challenges that slows you down.

Developments seem to be penetrating everywhere, including the conservation areas. Preventing such has continuously being cessful. So we have to live with it.

It’s your duty to ensure that we stop losing our wildlife to the hit and run incidents. Let’s ensure these wildlife road signs have been placed appropriately and respected. Just like NTSA ensures humans cross the busy highways safely, same should happen for wildlife.

We have interns and youth willing to do good for wildlife, maybe they can be of help in such.

What about suggesting for non-tarmacked roads on these arts? Especially the parts that cut across our conservation areas. Or presence of bumps or anything that will keep their speed in check.

We should also have wildlife sub-stations along these highways. With veterinary ready to attend to any hurt wildlife. Rangers to patrol along these roads frequently. It will help reduce these deaths as well as save the wildlife that made help after such incidences.

As I always say, every life is important. So its should be respected, no matter who it belong to.

Wildlife have the right of way just like the humans. We are the ones with the developed brains and driving these vehicles. Wildlife may not be able to judge the safety of crossing these roads, we are the ones to make that call.

Every wildlife should be protected and cherished. Let the frogs hope safely across the roads, the chameleons slowly make strides across them, all of them should not die again while crossing to the other side.

We are the ones who brought that division by building these roads through the natural habitat. Let’s not cause more damage/deaths.