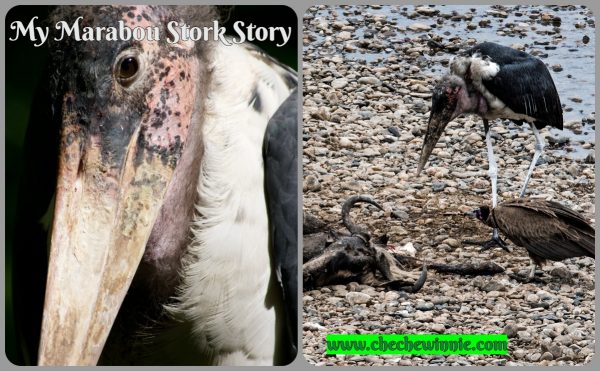 My Marabou Stork Story made me stop seeing them as the ugliest birds on our planet.

It was a bright and sunny Sunday afternoon. I was in the company of one of my very best friends. Who happens to be one of the best birders.

As usual, we would always explore birds and other species in the surroundings we found ourselves in. We were both wildlife students and always had something to discuss regarding nature and human impact.

Here is my M stork story

So this Sunday, we passed by a muster of storks and I commented about their ugliness. And my birder friend had a perfect humbling answer for me. He took deep breaths and asked me a question, “Do you know what comes to the mind of those storks when they look at you? ‘.

I remained silent and looked at him with a grin, so he offered an answer. “They are wondering, why is she that short. She is a very small human being ‘ I laughed and tried to defend myself. I didn’t win that argument so i had to apologize to the “‘beautiful’ Marabou Stork.

When in the company of a birder, be very careful how you describe birds.

A few years later, I had another encounter with these amazing birds.

I was participating in a game count for the Nairobi National Park. The block assigned to us had a huge muster of storks. They were all over that place, both on the ground and up the trees within that point.

One of the people whom we were taking part in the exercise, did exactly what I did. Commented about their appearance.

He is birder too and he seems not to care much about the comment. He easily described it as many people do. By stating that, God made all birds beautiful and all their ugliness, He gave it to the Marabou stork.

I remained silent for a minute and refreshed my memory. Tried to support the other qualities of these storms. But instead, they laughed at me and agreed that for sure, Marabou stork is the ugliest bird.

These are large wading birds with very long legs. Weighing up to nine kilograms.

They also have a long neck that has a bare throat pouch. A bald head that’s looks infected. Some of the attributes contribute to their ugliness.

They can be found throughout Sub-Saharan Africa. That is, in the grasslands, wetlands as well as in savannas.

Unfortunately, this bird has no voice box and instead uses its throat porch and flatters its bill to produce sound.

As Eagles sow higher in storms, Marabou stork is attracted to grass fires.

What do they consume?

They have a very wide range of prey they depend on for food. From the termites, frogs, snakes, baby crocodiles, etc. Both dead or alive.

Marabou stork lives in groups and will be seen roosting together at night.

They are super lazy and will be spotted standing around most of the time.

You will always notice whitish stuff all the branches and below the trees, they decide to make a home.

This is as a result of their poop. They even poop on their legs knowingly.

They have also been nicknamed, the undertakers

This is due to their habit of feeding on the dead.

Beauty is in the eye of the beholder.

So yes, Marabou stork may be ugly to some but beautiful to others.

They are incredible birds that are of least concern according to the IUCN.

17 thoughts on “My Marabou Stork Story”