What I learnt from the Blue Economy Conference 2018 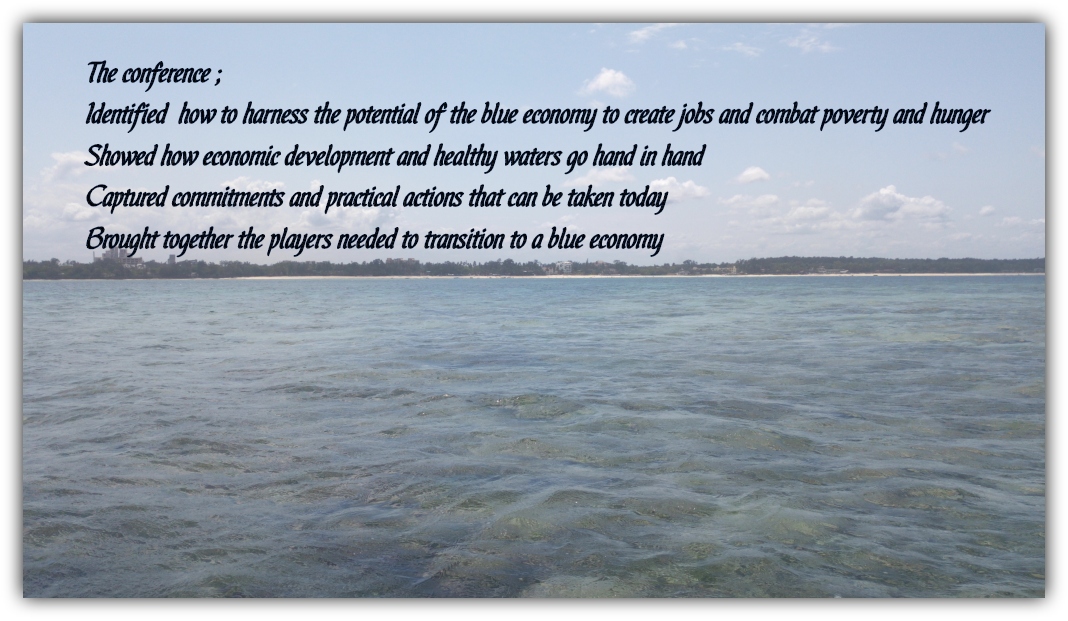 What I learnt from the Blue Economy Conference 2018.

The conference lasted for three short days and I believe its was a success. As I got to learn more and I know some people somewhere agree too.
It had the best timing and if all the wordings are made to reality. Then our oceans are in great hands.

So what re some of the things that really impressed me

Blue economy will unlock potential by marine and its resources.

For a long time, we (developing countries), have not taken water resources seriously. We lack an effective framework to sustain-ably  exploit these resources.

Requirements for a sustainable blue economy

A successful blue economy has to be sustainable. To avoid over-exploitation and destruction of the resources we look forward to exploit. Unlike gold mining, ocean will need to be allowed time and subjected to conducive environment for its resources.
For fishing to excel, then we should not fish the little ones or flock in the water bodies. We should allow fish time to procreate and grow in size. Hence able to strike the balance.

Blue economy plays an important role to other economies

Blue economy is a new dimension in our economies and hence inadequately exploited. It’s the new jack pot and we should be careful to do things right from the very beginning.
If sustain-ably exploited, then we are to gain much more and still maintain healthy waters.

Conservation of marine and its resources is paramount

A healthy ocean and other water bodies will be able to offer the resources to be exploited. Hence their conservation is a must. For a cow to give more and good milk, then you have to take good care of her. Same applies to all water bodies. It’s a two-way traffic relationship.

No one country can claim ownership of the oceans and its resources. This is because they touch different continents and always on the move with its resources. The fish migrate all the time, same to other species found in the waters. So if one country decides to mishandled these species while they are in their territory. Then the effect will be felt by all nations associated to that ocean.
As a planet its our responsibility to collectively take good care of marine and its resources.
Nations got an opportunity to read their commitments towards sustainable blue economy during the conference. This shows how  serious we need each other to succeed and have healthy oceans.

Sad fact: Research shows that if we don’t stop treating oceans like dumpsites. By 2050, plastic will be more than fish in our oceans.

Its sad that we have turned oceans into damp sites

Government support will help coming up with strict rules than will help to keep exploitation in check . As well as ensuring blue economy is a success and within the set global conditions.
Leaders will be able to lead their people on the sustainable ways of exploiting marine resources.

There were more topics covered during the conference. Including job opportunities, shipping, fishing, tourism, harbours, among others. More about their themes can be found in their websites. I love that they heavily emphasised on the importance of ocean conservation.
Climate change , waste disposable and illegal activities in the oceans are the greatest enemies to a sustainable blue economy.

I could not conclude this article without expressing some concern.
One of the presidents present in the conference said something that broke my heart. He tried to justify exploitation of natural resources and i seriously wondered what made him think that way.
His words went like this, ”Developing countries over-exploit natural resources out of necessity , while developed countries do it out of agreed”.
And I am like, no one can ever be able to justify over-exploitation of natural resources. These resources occur naturally, the least we can do is handle them with respect. take what nature can be able to replenish. Full stop.

As I was following the conference, I thought maybe its time I gave sailing a try. So sailing found its way into my bucket list.
Fish has not been part of my diet that much. In fact I can literally count the different fish species that I have ever tried. So yes more fish will make way into my plate in the future.

A healthy ocean equals to a happy planet

Humble reminder
If you haven’t voted for my blog yet. You can still vote for me using the following link. My entry number is 45.