Evil deeds done to wildlife that will break your heart 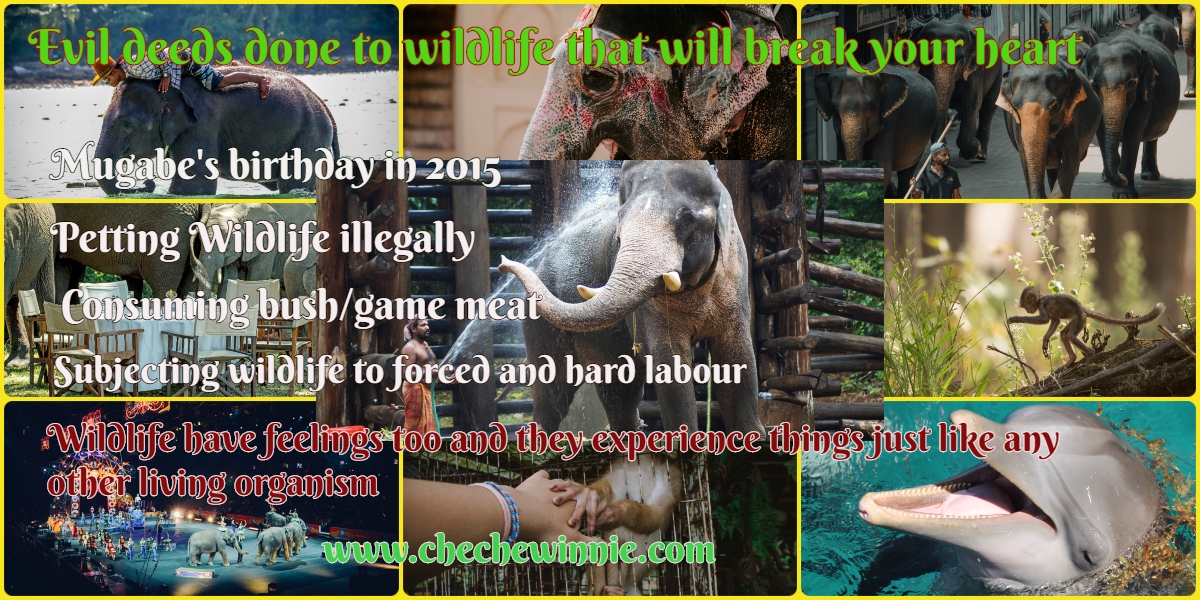 Evil deeds done to wildlife that will break your heart.

These deeds are executed by us without caring how wildlife feels about it. Or what impact they have on them. They are heartless and brutal.

I came across one that almost gave me a heart attack. Allowing me to reflect on similar incidences that cross my path while research wildlife status around the world.

Am still shocked and angry about what I read. Do we have wildlife conservationists in Zimbabwe? Who would have stopped this guy? But wait, he was one of the worst dictators. So I guess no one would dare oppose him.

Apparently, this guy’s birthday saw the death of two elephants, two buffaloes, two sables, five impalas, and one lion as a source of food. That’s right. This wildlife was killed to provide meat for his birthday party.

Read more about the party here.

Do you see endangered species on that list? Do you get an idea that would have necessitated their death?

This guy made his people go through a lot of pain and loss. But guess what? They still made his birthday to be a public holiday. Named Robert Mugabe National Youth Day and will be happening on twenty firsts of February.

No matter what power you have, every life is important. We have to be reasonable on how we handle public resources especially those who we elect to represent us in the governments. Your job is to do the great good for all citizens and not satisfying your selfish desires.

Petting wildlife illegally is also one of the evil deeds

Wildlife can be adorable hence able to win our hearts crazily. But stealing them from their natural habitat and taking them with you. Is not acceptable.

In Kenya, we have regulations set to guide those who wish and have the means to have wildlife in their land. The regulations have been made in favor of wildlife welfare. Citizens have to bid by these regulations and KWS still has the power to have the wildlife back if subjected to unfavorable conditions.

For those who choose to use the cut short. Once caught, they get arrested and charged. Most of them don’t know how to handle this wildlife and end up causing them stress. The prison them, use them for fun/entertainment, among other unspeakable evil deeds.

If you would like to pet any wildlife, use the right channels and ensure to abide by given regulations. Be ready to go out of your way to offer them what they need. But most important and useful. Just let them live in their natural habitat, in the wild. You can always visit them when you miss them.

Bushmeat is legal to consume in some countries. And humans end up obtaining it using ruthless and illegal means. While where it is forbidden, some still do eat it while hiding from the authorities.

Many many years ago, it’s said that humans used to hunt and gather in the wild. So we depended on wildlife for meat and hide. Then we evolved and domesticated some of these animals. Hence shifted our feeding and need for meat to the domesticated animals.

Somehow, humans are still attracted to the game meat and will do anything to get it. We have hunted so intensely to a point of threatening populations of the targeted wildlife.

Some believe that game meat has some form of medication, east it as a delicacy, as a show-off, some to mention a few. We have some very funny evil reasons for eating game meat.

We are very different all over the world. In that, it’s okay to consume monkeys, hippos, giraffes, snakes, etc in some parts and unheard of in some. It all depends on what is being practiced and accessible in these places.

But I think we should just stick to consuming meat from domesticated animals. Or better still, embrace a vegan diet.

For those who are allowed to eat game meat, refrain from the endangered and vulnerable species.

From what I have been seeing on social media, elephants seem to be the greatest victims. They have been used in circuses, in farms, used for transporting both humans and their loads among others. Some of them end up not fed enough hence very weak.

Monkeys to have been trained and used as waiters or entertainment. There was this tiny monkey watching utensils in a sink. The video was liked by many as if whatever was being done to the monkey was okay or funny. It was a baby monkey that deserves to be in the jungle with its mama.

Treat wildlife as you would like to be treated. They do have rights and deserve respect. They feel pain, hatred and do get tired, just like anything living organism.

Don’t go around making funny comments in videos that show wildlife being persecuted. You are only fueling and worsening the situation. The evildoers will think they are doing great and hence engage more in these evil deeds.