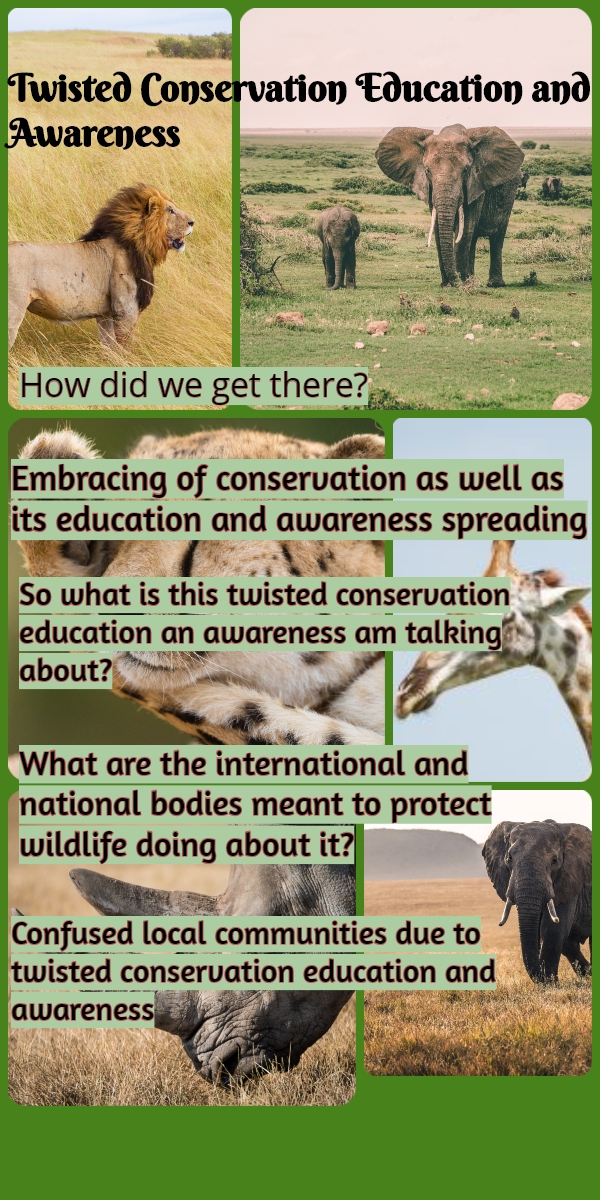 Why are we confusing the local communities and other kind hearted people from all corners of this amazing planet?

Conservation is being turned into a jackpot for mining money. And people are applying all cruel means they can think of. Wildlife and innocent people are being lied to, their resources stolen, and many other awful things.

How did we get there?

Few years ago, not many knew or understood much about conservation. Most wildlife were abundance and safe from danger. It was not of necessity.

Then we started to over-use the natural resources. We took more than the nature could regenerate. And in the process, started to loss some of these resources for good. They disappeared forever and in return gave reason torecheck how we used these resources. Giving birth to conservation.

Conservation was not well received and still not yet close to most people’s heart. Since it meant reduced resources harvesting and that meant reduced dollars. No one likes that, everyone love making more and not less.

Embracing of conservation as well as its education and awareness spreading

Genuine conservationists used everything they had to ensure it survived all the opposition. They ensure to reach the most affected places and helped the locals understand importance of protecting natural resources surrounding them. In the process, the rest saw and appreciated their efforts. Hence conservation gained some good roots to withstand opposition from those against it.

Conservationist either do it as individuals, groups or even organizations. The aim being to consolidate their efforts and fight whatever that was derailing conservation success. After all, more than one head is better while solving problems. But something started to go south ways.

So what is this twisted conservation education an awareness am talking about?

Do you donate to wildlife fund organizations? Or support conservationists/local communities? Or any activities that is meant to support wildlife welfare.

I guess most of us do so or something close to that. And we do so because we love wildlife and wish to have them longer. For the future generations and ensuring that our planet don’t loss these treasure. We all give and contribute what we have for the love of wildlife.

And that’s how twisted conservation found it ways into our already destroyed and vulnerable planet.

Sadly, a group of evil people have realized how to use wildlife for their benefits. They are ripping off these donations and funds for their own benefits. And some going to an extent of harming wildlife they are supposedly expected to protect. Or misusing local communities resources.

Most of the time, the local don’t know much about conservation of the wildlife surrounding them. And some already have a cold shoulder towards them due to human-wildlife conflicts. So when we manage to convince them to join conservation ride, it’s a milestone. So what happens when they are convinced by the “fake and evil” conservationists?

These evil people have disgraced true conservation and justice for wildlife. Conservation is already a hard and yet to be embraced in most corners. Twisted conservation seem to be penetrating pretty fast.

Currently in Kenya, there’s an organisation being accused of stealing elephants valves from their mothers. So that they can pretend to have saved them as orphans.

It all started here.

Here are the links to some cries from several conservationists about this recovery.

It’s yet to be confirmed by the Kenya Wildlife Service or any bodies meant to protect wildlife. In fact, KWS is also being blamed to have been part of these evil acts. It all started when a video of this act made its way into the social media.

What are the international and national bodies meant to protect wildlife doing about it?

It have been several days since this video made it way into the social media. People have discussed about it, demanded action from above and even starting uncovering such acts by other organizations. But all these bodies, have remained mute. Are they investigating about it or allowing the public to get tired and drop the topic.

After all, that has been the trend. Do you remember the rhinos we lost as they were being translocated? We spoke against it, it trended, but I can’t say anything meaningful was done. All I can remember , is our leader meant to protect them, told us to go to hell. That’s right, for speaking out and demanding to know what happened to our rhinos. We were told to go to hell. It was even taken a notch higher and some people saw it as a joke. They took opportunity and used as a slogan to market Hell’s Gate National Park. (He didn’t tell us to go to hell, he meant we go to Hell’s Gate National Park ). Am still bitter about the whole thing.

Confused local communities due to twisted conservation education and awareness

The local communities have been the great losers, As they have went an extra mile of offering their land for conservation. Due to lack of complete and correction information. It has been close to impossible to know what is right from wrong.

Most of these organizations and individuals have capitalized on the loopholes. Making all us trust and believe in their croaked ways. We end up strengthening their evil deeds and harming wildlife in the process unknowingly. They have made us to harm the same wildlife we think we are protecting.

They come up with complicated and hard contracts. That facilitate them to take land and other resources meant for both wildlife and local communities. And still rip off the innocent generous kind hearted people all over the world. This evil, right?

Conservation has been turned into politics. It’s like its for the haves and have nots. Governments will easily side with these scrupulous fake conservationists. Because they have something to gain. Forgetting to look after wildlife and local community welfare. Why?

I just have words and platform to air my concerns. It may or may not change anything. But its my wish and prayer that someone somewher will get this message and help where they can. May the sincere and genuine conservationists tightened their grip. May you not lose hope and give up this fight. It’s fighting for the wildlife you love and treasure.

Together lets point out such evil deeds. Let’s collect all the concrete evidence we can get and put these people out of business. They may have power and money but our passion of our wildlife surpass all that. We have to do it or die trying.