Primates: The Most Developed and intelligent Animal Species 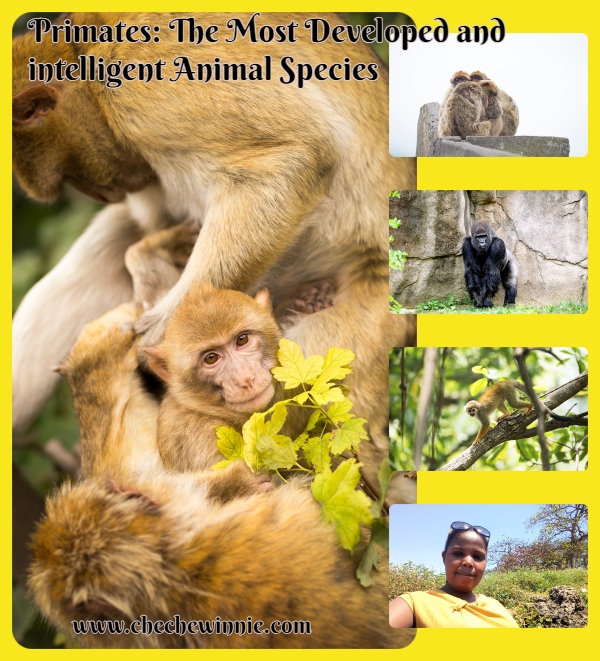 Primates: The Most Developed and intelligent Animal Species

Primates are characterized by large brains relative to their body shape, and an increased dependency on their visual acuity compared to their other senses.

Compared to other mammals, they tend to have slower rate in reaching maturity. But on the bright side, have a longer lifespan.

They are very social animals. But depending on the various species, some may live in solitude, paired or groups in their adult lives.

Do you love climbing on stuff, from trees, mountains, hills? Don’t worry, you are a very normal private. Because privates involves species that posses adaptations for climbing trees. So yes, lets use our climbing skills effectively.

Some groups of primates

What does this show?

It shows our connection to the other animals giving us a reason to be conservationists. We are one big family that should taking care of each other.

Unlike other animals, we evolved and have brains that actual works. Just because the rest failed to evolve as us, doesn’t mean we leave them out.

Wildlife have brains too

Their brain may not function like ours. And comes in different shapes and sizes.

When we are busy inventing stuff and coming up with solutions to our life problems. Same happens to wildlife.

They are able to adapt to new environment, protect their offsprings, mark their territory, escape their predators, hunt their prey, etc. They do stuff that need calculations well done. Which are successful by exercising their brain muscles.

See, their brains are not mashed potatoes. They just think differently from us. Do stuff and perceive life from a different angle than what we are used of.

Getting to understand why and how wildlife operates and behaves is one of the best studies. It opens you to a wide rich of information that shows you how wildlife can be a very intelligent and complicated species.

If you allow them a chance, you can learn a lot from them.

Primates are one of the successful evolution story.

they are at the verge of extinction due to activities done by one of them, humans.

That’s problems such as deforestation, habitat fragmentation/loss, the killing of primates, etc.

In the next few days, we will dig deeper about the various groups of privates. Our impact on their survival and what we need to do to protect them.

15 thoughts on “Primates: The Most Developed and intelligent Animal Species”