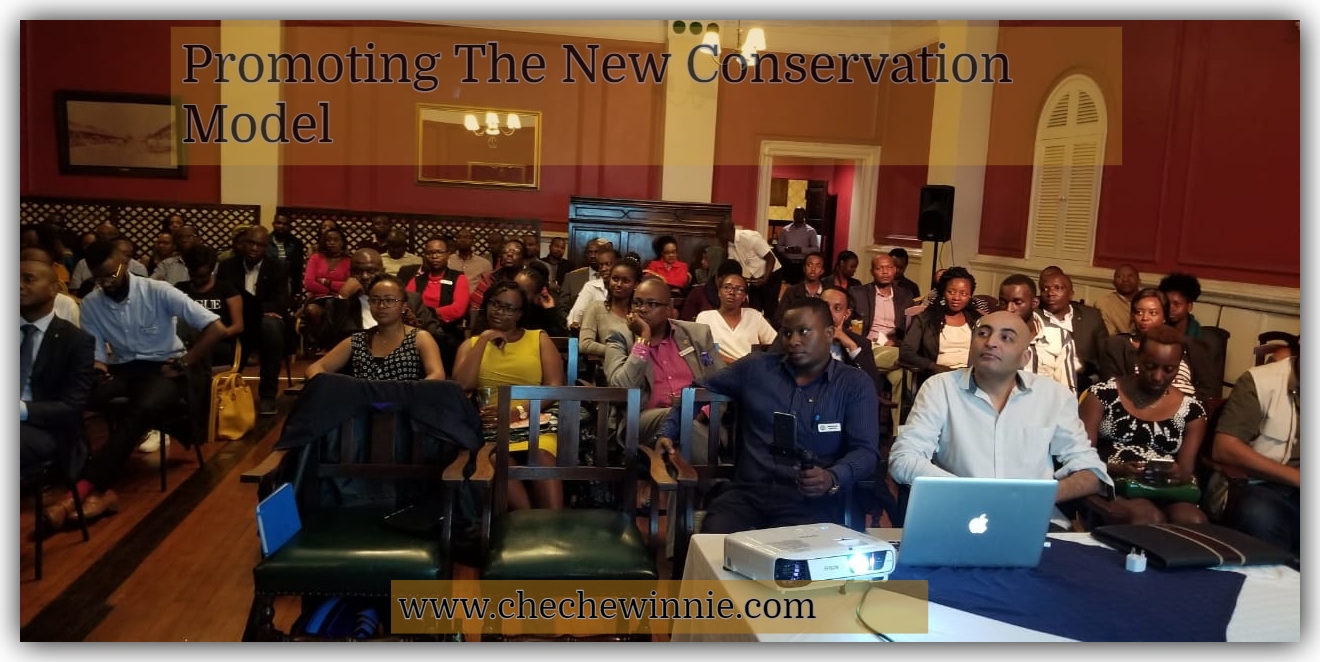 Promoting The New Conservation Model. Through a talk by CEO of Elephant Neighbour Center, Mr. Jim Justus Nyamu. One of the greatest conservation heroes. Do you remember the man I told you literally walks for the elephants? He is now promoting a new conservation model that is aimed at. Promote Conservation for Heritage as opposed to Conservation for tourism.

So how was the talk?

Unfortunately, I was late for a couple of minutes but was lucky to catch up at the best moments.

He had just started narrated about his various walk across the country, countries, and continent. This gentleman has walked many miles and only his shoes truly understand the miles covered. And he does all these walking for the elephants. He wants all of us to understand the reason why we should not allow them to disappear.

Through the talk, he was able to bring out this important concept that will help bring a strong drive in conservation spirit. Knowing that your future grandkids or generation misses witnessing the presence of the elephants just because you chose not to do anything. Is enough to hit reality into your head.

We are a generation that only thinks of itself and profits. Doing our best not to care about those who will come after us. What we forget is that, whatever we have today. Is borrowed from the future generation and we should take good care of it.

When you decide to fight to poach and help protect wildlife. The future generation will not have to read them in books, but rather experience them in person.

Those who have already lost their wildlife and now get to enjoy them in zoos, sanctuary or any other captive wildlife structures. Know the pinch and some have tried to help us understand what awaits us if we continue business as usual. So we have to wake up and protect what is left of our heritage.

I was happy to see people asking questions and wanting to know what they need to do to help. A good indication that they are ready to answer the call. This is just the beginning, after hearing, the action is what matters the most.

Best stories during the talk

It was a great meeting with great people. And they were very jovial and interactive. So when the floor was open. Several good stories came up.

My best story was learning that hyenas can crush any bone except the knee cap one. I didn’t know this, despite being a great fun of hyenas. So one little knee cap won’t allow the hyena to crush it. It is important to note that hyenas are very important in our ecosystem. By controlling diseases spread. This is because they crush and consume anything that crosses their path (except the knee cap of course). By doing so, if the dead animals died due to sickness, it won’t spread to other animals. Hyenas have a way of breaking down the diseases with their strong digestive systems.

Then I heard of a very interesting story about a dog and an elephant. Whereby the dog gave birth several times while the elephant was still carrying her pregnancy. As you know, elephants carry their pregnancy for 22 months while dogs for about 68 days. So the dog at some point asks the elephant, “Are you sure you carrying something inside the there”. Elephant’s answer was the boom, “Hey, When I give birth, the whole world notices it. But when you do so, no one really does notice”

Tourism has been a big benefit to African countries, bringing in huge amounts of money into their economies. As a result, most of them having been conserving wildlife to sustain these income flow. This has made them look very little into the wildlife welfare, as their aim is to gain more. So they have concentrated in building prestigious hotels near the conservation areas and even within.

Developments have increased within our parks and reserves, and it has turned into normal business. Pushing wildlife into the neighboring communities, hence creating human-wildlife conflicts. Surprising, while reporting such incidences we tend to concentrate on the menace created by the wildlife. And fail to point out what lead to that moment.

If we conserve for heritage, we will not allow tarmac roads into our conservation areas. Or any developments whatsoever. We will allow wildlife to enjoy their natural habitat as natural as it can be. We will concentrate on the welfare of the wildlife, and not how much we can make by modifying a particular thing to accommodate tourism.

Hey, am not against tourism. I just advocate for one that respects and empowers wildlife welfare. They are the CEOs and should be respected.

As the lawmakers come up with policies regarding wildlife, they should have their welfare concern in mind. The scientist, conservationists, and lawmakers should come up with a common ground for the benefit of the wildlife. These three can have a productive session as they have all the information needed for a bright future of our wildlife.

Conserving for heritage may not bring in the cash needed hence low profits, but it will protect our heritage for generations. We may think that we can price tag our wildlife and other natural resources from the revenue we gain from them. But we are very wrong, they cannot be price tagged.

I would love you to join and support this conservation model. Not only is it good for our natural resources and future generations. But it is good for you and means. The joy of knowing that you helped save our heritage with no money making intentions, is good enough to help know that you did something right with your life.

Don’t allow any other species or resource disappear due to our greed. We have over-exploited them for so long and we should stop now.