We Kill Wildlife while protecting Livestock, But feed captive Wildlife with Livestock 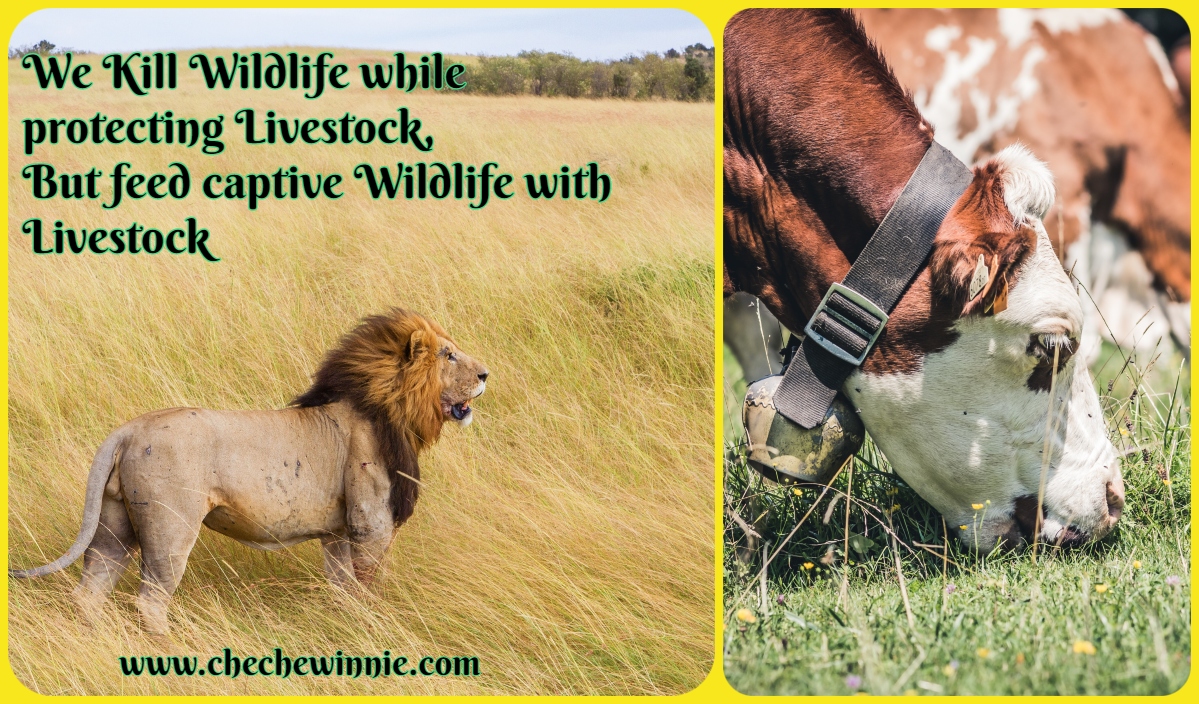 We Kill Wildlife while protecting Livestock, But feed captive Wildlife with Livestock

It refers to domesticated animals that have raised in an agricultural setting to produce labor and commodities such as meat, eggs, milk, fur, leather, and wool.

They are animals that early humans managed to change their way of living and extracted them from their natural habitat.

Unfortunately, just like slavery. It was an aggressive invitation into the humans’ settlement. This is because they had and could do something of help to human species. How do you treat domestic animals around you?

Livestock had to undergo various changes and developments so as to meet humans needs. Whereby their bodies have been injected with drugs, fed food to boost whatever seemed to be missing, and even forced to grow faster through science.

They completely have no leisure to live their own lives as they please. But what seems more profitable to humans. For example, a chicken that would take a year to mature and hatch their own chicks. They now take months, if not weeks, to mature and make way to our plates. The eggs no longer need their mama’s warming them up for 21 days. Incubators took over.

Poor livestock, living by our terms and seem not to have to defend themselves.

Am happy to see a part of humans fighting for livestock that is being placed under uncondusive environment.

They are able to ensure that no livestock is killed ruthlessly. They are transported in such a way that doesn’t cause pain to the transportedlivestock. The ones being used for labor provision are not overworked.

Just to name a few. They are there to ensure that we respect and treat livestock in a good way.

Why do we kill wildlife while protecting livestock, but feed captive wildlife with livestock?

During human-wildlife conflicts, wildlife may end up killing livestock. And when the concerned groups come to the scene, they will mostly go with the idea of killing the wildlife.

Yet we have other means like capturing the stray wildlife and taking them back to their natural habitat. The community will be angry at that particular wildlife to a point of going after i it rather than looking for a safe place as the wildlife get to be captured.

Anger makes them think that they can harm that wildlife that has killed their animals.

Have they either thought what angry stressed wildlife can do to anyone confronting them? There’s nothing dangerous than a lonely hurt stressed wildlife. They are at that particular timefighting for their lives and will do anything to not die.

As a result, they may hurt humans or even cause deaths. Which could have been avoided by simply allowing the specialists to capture them as we stay in the safe zones. Many livestock may die as we wait, but we can always have them replaced or farmed.

Do you know of any livestock species that is endangered? Very few, simply because their value is no longer valued by humans.

But for wildlife, we have many of them joining this list at a rapid speed.

As we have seen, it’s very easy to kill wildlife that may have been forced by circumstances to kill livestock.

Yet, we place wildlife in captivity and feed them livestock. Wildlife that can be able to hunt for itself in the wild. But we choose to place them under captivity for our fun.

So it’s okay for us to kill livestock and feed them to this captive wildlife. But very wrong for lost stray wildlife to kill them for food.

Why do we love living a double standard lifestyle?

I don’t say it is okay for wildlife to kill livestock. But we have to be considerate and understand that it is lost stray wildlife just looking for food. And once it is captured, it will out of our way. And we can be able to buy other animals.

They can always be replaced, but wildlife once wiped out. It’s gone forever.

Let’s embrace non-confrontational methods. Being reasonable and humane on how we handle stray wildlife.

7 thoughts on “We Kill Wildlife while protecting Livestock, But feed captive Wildlife with Livestock”