When Enough is Enough 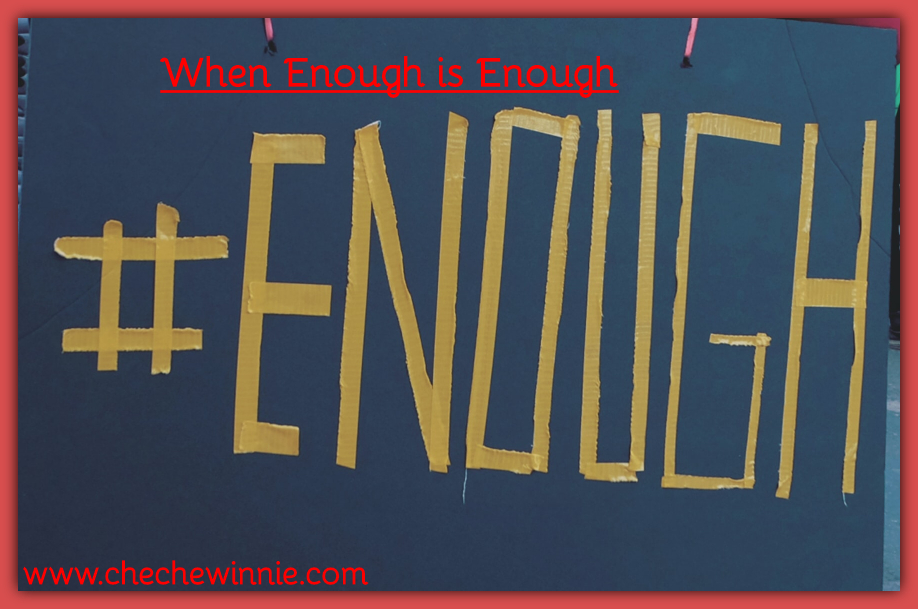 When Enough is Enough

When Enough is Enough, people/nature/developments/almost everything has to make a crucial decision that will work towards their desired need or what they want to be changed. It’s a point where the action is the only thing making sense and happening. No more chances or patience, but acting on the issue alone is what remains on the table.

For people, they may be at that point where they consider that they have nothing more to lose, or worry no more about losing anything, or its the only thing needed of them to do for survival. It’s not a good point and stage to be, as hurtful decisions are reached to.

When some Humans ignored COVID 19 set rules, Governments got enough of them and make the rules more strict

The state of having enough of something comes especially when you keep hoping for a change of something with no success. You push, plead and even try to have a change of wind, but things don’t look up. It’s a state where goodwill is trusted for the change. Until its no longer looked up to and the participants resort to the use of force.

Despite people witnessing the spread and death caused by Coronavirus, they still choose to expose themselves. Just to enjoy some fun with their family and friends, causing more harm and risk of infections. They clearly knew the results, but that seems to have been given a back seat.

Mother Nature is also almost having enough of us

For a very long time now, we have been advised and educated on the negative impact we have been to mother nature. We have taken from her more than she can keep up. Taken away her ability to function correctly, with no much thinking given to it.

We have been depending on natural resources without thinking of its depletion. We tend to think of them as unlimited resources, yet they are now proving to be limited if not sustainably used.

Climate change has created climate refugees, who are increasing in numbers each day. People have lost lives and property to natural disasters. A clear sign that mother nature has got enough from us.

Wildlife land continues to be encroached to give space for human settlements and developments. Not forgetting that most wildlife especially in Africa, live within the communities. Land use has greatly been changed, hence not accommodating human-wildlife interaction. And as a result, human-wildlife conflicts have turned dangerous. The local communities are no longer open to the idea of co-existing with wildlife. And wildlife’s need for food and space, make them frequently visit humans.

Poor Natural resources Management and lack of good political will

This has escalated poor management and mistreating of anything that has no voice of its own. Including:

When you see people fighting ruthlessly to have their voice heard, be keen, and understand where they come from. They have no time and room for PR (Pretentious Public Representation). They may end up doing extreme stuff out of anger, frustrations, and even tiredness of having enough of it. Don’t be quick to judge them, first get to understand where they are coming from.

Sadly wildlife and environment have no luxury of all that. Once they have got enough of it, they get extinct and disappear forever. They may not have enough time to allow us to put our affairs together. But rather need us to act as early as yesterday. The same applies to climate change, it will not stop warming our planet just because we choose not to attend to it. Instead, it will continue to but hot and get worst.