What do You Think About BullFighting ? 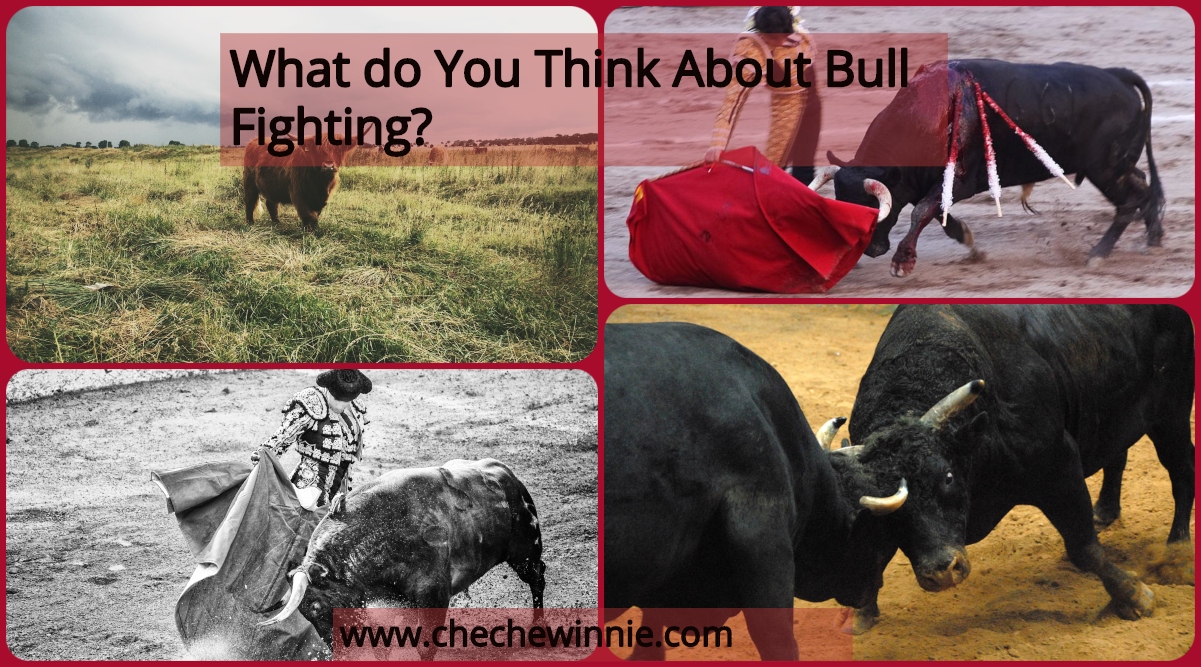 What do You Think About BullFighting?

What do You Think About BullFighting? Do we really need to support such traditions in this century? Do we ever consider the bull’s side of the story?

It is believed to have been borrowed from bull worship and sacrifice. And originated from Rome. Where humans versus animals competitions were held for entertainment purposes.

This then spread to other parts of the world. I guess we got carried away by the famous say, when you go to Rome, do as the Romans do.

Traditional bull fighting has been considered as a cultural/traditional practices. That attract people all over the world. The event have sponsors and sometimes aired on the televisions.

People travel across continents to witness and be part of this awful practice. They fill the stadiums and enjoy seeing the bulls fight for their lives. I wonder if they see it that way.

Bulls are usually ‘prepared’ for the bull fighting event

They are bred in huge ranchers where they are subjected to wild living conditions. To enhance wild nature in them as they grow up.

Humans especially the ones considered criminals or the “trainers” are used to provoke these bulls in preparation for the big fight.

Once the bulls are considered fully prepared then they are presented for the fight.

So I came across an article that elaborated what happens to these poor creatures just before the fight begins. And it’s heart breaking.

Their horns are cut to compromise their balance, their eyes applied with petroleum jelly to impair their vision, subjected to darkness to cause anxiety and even beaten up.

All these with the goal of making the bull to fight, which to the bulls, is fighting for their lives.

Sometime back while I was in high school. We visited this particular area that is known for bull fighting. They would feed the bulls with substance that had some alcoholic properties and used some providing songs. So as to make the bulls fight. They would perform some dances and songs while following the bulls.

These would really annoy the bulls and they would charge. Not only would they charge towards the other bull but also towards the people nearby.

Bull Fighting should be stopped everywhere

It’s time we looked at bull fighting from the bull’s point of view. How many bulls lose their lives during these fights. What about the humans that end up dead or succum to injuries?

These are reasons enough to stop these traditions and embrace civilisation.

Every life is important and no one has a right to cause pain to any living organism for fun.

There’s no fun where the pain is involved. Let’s face out any such inhuman traditions that we may be still holding to.

Just like sport hunting, it’s time we allow other animals some peace and stop playing with their lives.

What if they had powers and start killing us for fun?

15 thoughts on “What do You Think About BullFighting ?”