Is enough being given back to Wildlife Welfare and Local Communities Developments? 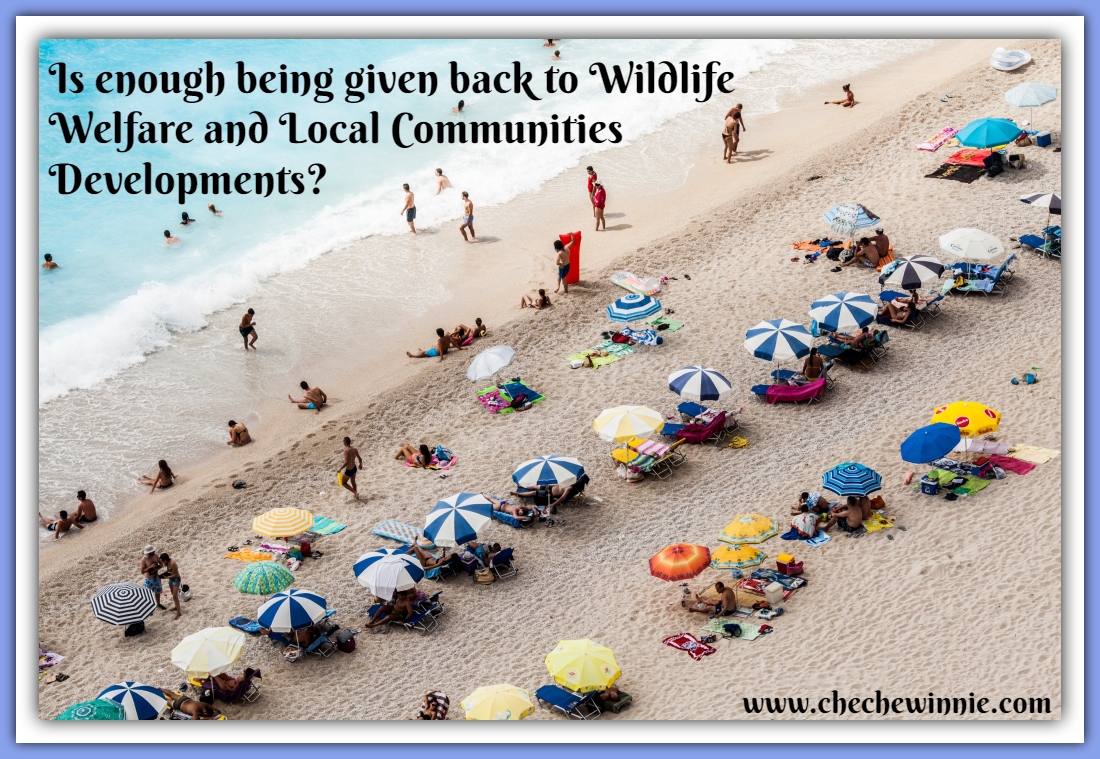 Is enough being given back to Wildlife Welfare and Local Communities Developments?

Is enough being given back to Wildlife Welfare and Local Communities Developments?Or they are seen not to deserve the share of the pie.

Tourism has increased worldwide. As more people embrace the safaris and travels to different parts of the world. Giving birth to both domestic and international tourists.

Which is a great development in many angles. We are able to appreciate different cultures and nature/wildlife of different Promoting developments in these areas, among other great stuff.

Revenue from tourism has been sky rocketing and different nations have managed to benefit from it greatly. To a point of being a backbone of their economy.

It’s Citizens have been able to get jobs, got connections with other nations and even manage to support other activities in those countries.

All these is possible due to the existence of the various wildlife. They are the major source of attraction. Their existence makes it possible for us to obtain all that revenue.

Without this wildlife, then we would have insufficient reasons for crossing different continents.

How much of the generated revenue is being given back to Wildlife Welfare?

Wildlife is like the machine that drives tourism. Which needs upgrades, refilling, time off, check up and frequent check-ups. It also need resources to be set aside for emergencies and unforeseen calamites.

Do we allow them that? Do we consider them on priority whie sharing the generated revenue.

Just how do we see wildlife in our boardrooms as we review the increasing revenue being collected through tourism. Does wildlife even cross our minds at that particular time?

It’s sad and heartbreaking, that we don’t treat them with the respect they deserve. We are just like the monster bosses who destroy career developments of excellent employees. Who eventually quit when they can’t take it anymore from the ungrateful bosses.

What about the employees who take good care of these wildlife?

These guys give wildlife their all despite most of them being paid peanuts. They even place their lives on line for wildlife. Some sadly don’t even have equipments matching those of the poachers. Ending up losing lives as they do their best to protect the precious wildlife.

Some of them have their homes within the conservation areas. Doing their best to do a good job for wildlife.

Luckily, they end up having a close relationship with wildlife. Which turn tobe their favorite family. Wildlife become part of them, and they can do anything for tem. Despite not being paid enough.

But their lives are important. Tourism has money, lets upgrade their equipment and make their work easy. Their living conditions should be upgraded too.

What of community development projects?

Some communities have given their land to wildlife. Some have found ways to co-exists with them. But most of them languish in poverty. Like wildlife, they contribute in taking care of make dollars that are transported and minced in the cities.

This is one of the reasons, they don’t understand why they should go on in protecting wildlife.

What is so hard in promoting these projects among the communities. Allowing them to see benefits of their good job in conservation.

Private and non-governmental groups try their best with these projects. But its time for the governaments to dive in and do something.

Wildlife among other natural resources have been giving us huge benefits but we are not investing enough. We are just siphoning from them continuously.

In return, they are rapidly disappearing from us through extinction and nature unable to produce more of it.

Sadly, we have gotten so used of moving on to the next available option . Without allowing ourselves to thinkon ways we can be able to practice sustainable living.

Let’s put some effort and investment in all natural resources that hold our existence.

1 thought on “Is enough being given back to Wildlife Welfare and Local Communities Developments?”